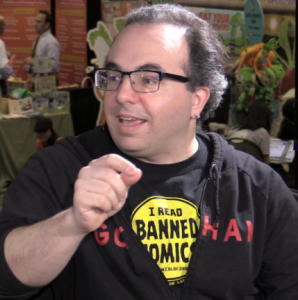 than 15 years experience as a professional journalist in both the print and documentary worlds. He has written articles and produced video pieces for numerous magazines and web sites, including Guitar World, Future Music, Super 7, the music magazine Revolver (where he was also managing editor), and the New York Post. In 2007 he released his first documentary, Toys Are Us: A Revolution in Plastic, which focused on the world of designer vinyl toys. He also released the documentary, Plastic Galaxy, a documentary that explores the groundbreaking and breathtaking world of Star Wars toys.

Brian is also a die-hard toy collector. Most of his office is taken up by vintage robots and ray guns from the 1930s through the 1960s; he writes about much of the collection at his blog, Doc Atomic’s Astounding Artifacts (astoundingartifacts.blogspot.com).

When not chasing down turn of the century tin and plastic, he’s hunting toys for his Star Warscollection. (Big Surprise!) While not as big as some of those featured in Plastic Galaxy, Brian’s proud of his toy shelves, which house some pretty neat stuff (if he does say so himself). When he’s not overrun with work (or with making a documentary), he writes about some of these toys at his OTHER blog, Galactic Awesome (galacticawesome.blogspot.com).

Brian is a huge, HUGE fan of the original Star Wars trilogy, particularly the first film, which he’s seen more times than he can count. He also regularly gorges himself on both classic and modern science fiction films and books, Dr. Who and Star Trek episodes, and even deep cuts like Tom Corbett: Space Cadet, and Space Patrol.